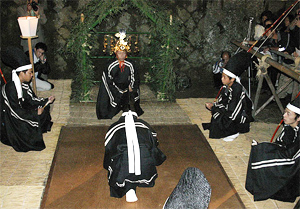 Driving East from Nara city central to Tsuge area, there is a shrine called Yahashira Shrine, where you can witness Japan's folk performing art 'Daimokutate' that is available only on the eve of the Yoimiya Festival on October 12 every year. You can enjoy the traditional forms of Japanese performing art in the medieval era. The theme is based on the Genpei War.
Performers are usually seventeen year old boys in Kamifukawa. It is commonly regarded the boys are acknowledged as adult members in the local community by taking part in this shrine's traditional religious organization.