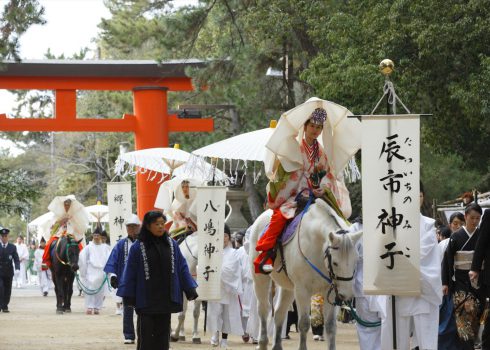 The Kasuga Wakamiya Onmatsuri is a regular festival of the Wakamiya Shrine, which is located in the precincts of the Kasuga Grand Shrine. In 1136, during the late Heian Period (794–1185), Regent Fujiwara no Tadamichi visited the Wakamiya Shrine and performed a ritual to pray for peace and tranquility throughout the land, bountiful harvests, and peace and harmony amongst the people on behalf of Yamato Province (present-day Nara Prefecture), and ever since then, the festival has been held every year down the centuries without interruption. This year marks the 885 time the festival has been held. A diverse variety of Shinto ritual performing arts are performed as offerings, and there are also solemn rituals performed in the middle of the night. Today this festival is designated as a National Important Intangible Folk Cultural Property and conveys traditional Japanese culture and customs to the people of today.
The Owatari-shiki ceremony—a parade of people dressed in historical costumes from different periods of Japanese history, from the Heian Period through to the Edo Period—begins at 12:00 p.m. on December 17. The parade winds through the streets of Nara City, and can be viewed from the roadside. (Photo taken by Yoshihiro Matsui, provided by Kasuga Grand Shrine)