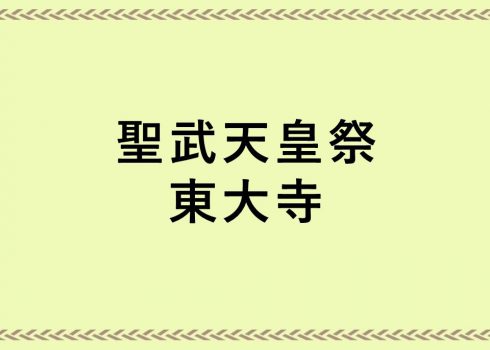 Praising the virtues of Emperor Shomu in the anniversary of his death: Shomu-Tenno-Sai／Todai-ji Temple

The driving force behind the construction of Nara’s Great Buddha was the passion and faith of Emperor Shomu. Accordingly, every year a Buddhist mass is held on the anniversary of Emperor Shomu’s death commemorating the Emperor’s virtues. A Rongi-hoyo (“Debate Memorial Service”) is conducted in the Tenno-den Hall from 8:00 a.m. until 11:30 a.m. For this ceremony only, it is possible to worship from outside the Tenno-den Hall, which is not ordinarily open to the general public. (Access is permitted from the start of the memorial service until 2:00 p.m. On the eastern side of the approach to the Great Buddha Hall soon after you pass through the Nandaimon Gate is the Chokushimon Gate. Pass through this gate and follow the path until it ends.) Beginning at 1:00 p.m., there is a gorgeous procession comprising Shikishu monks and Chigo (beautifully dressed children). Departing from Nara Kasugano International Forum IRAKA, the procession passes through the Nandaimon Gate and up the approach to the Great Buddha Hall. When the procession reaches the Great Buddha Hall, the Shomu Tenno Kyosan-hoyo (“Memorial Service for Emperor Shomu”) is performed.

*Only buddhist service will be conducted this year.