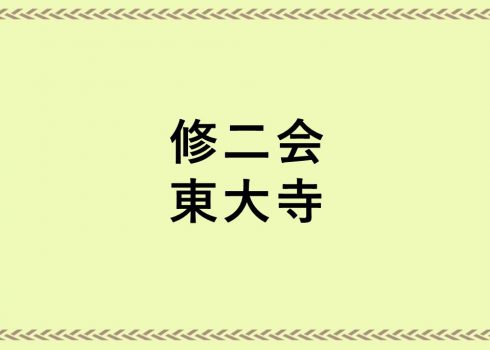 A repentance ceremony that has continued for more than 1260 years: Shuni-e／Todai-ji Temple

Performance of this traditional ceremony in the Nigatsu-do Hall of Todai-ji Temple has continued every year for over 1260 years. In the ceremony, monks confine themselves within the Nigatsu-do Hall and confess and repent to the eleven-faced Kannon Bodhisattva, the main deity enshrined there, on behalf of the people, praying for the safety of the nation and welfare of society. Nowadays, the ceremony is conducted over a two-week period beginning March 1, but originally it began on the first day of the second month of the lunisolar calendar, hence the name Shuni-e (meaning “Second-month Service”). This is also the origin of the name Nigatsu-do (meaning “Second-month Hall).
Late on the night of March 12 (around 1:30 a.m. on March 13), a ceremony called Omizutori is held to draw sacred okozui water from the Wakasai Well underneath the Nigatsu-do Hall to offer to Kannon Bodhisattva. Also, in order to provide light to the select group of monks, called rengyoshu, who perform the Omizutori ceremony, on each night of the Shuni-e ceremony at 7:00 p.m. (7:30 p.m. on March 12 and 6:30 p.m. on March 14), selected believers known as doji carry huge 7 meter long torches around the balcony of the Nigatsu-do Hall in a ritual called Otaimatsu, showering sparks down on the spectators below as they dance around the stage in the highlight of the Shuni-e ceremony. This ceremony has been such a part of the lives of the people of Nara since ancient times that it is said that spring comes to Nara when the Omizutori ceremony has been completed.
*Otaimatsu is performed every day of the ceremony period, but performance times and crowding may change depending on the day. Please check temple information in advance.