In autumn, the many trees in Nara Park, including cherry, maple, and ginkgo, form a glowing tapestry, a visually stunning display of colour. A timeless scene to wander through, camera in hand. Covering more than about 1,600 acres, wherever you stop to admire the autumn colour in the park you’ll see a different aspect. The many faces of Nara are waiting to be enjoyed, including the Nara Palace Site Historical Park, where you’ll experience something of what the ancient Nara Period (710-784) must have felt like. 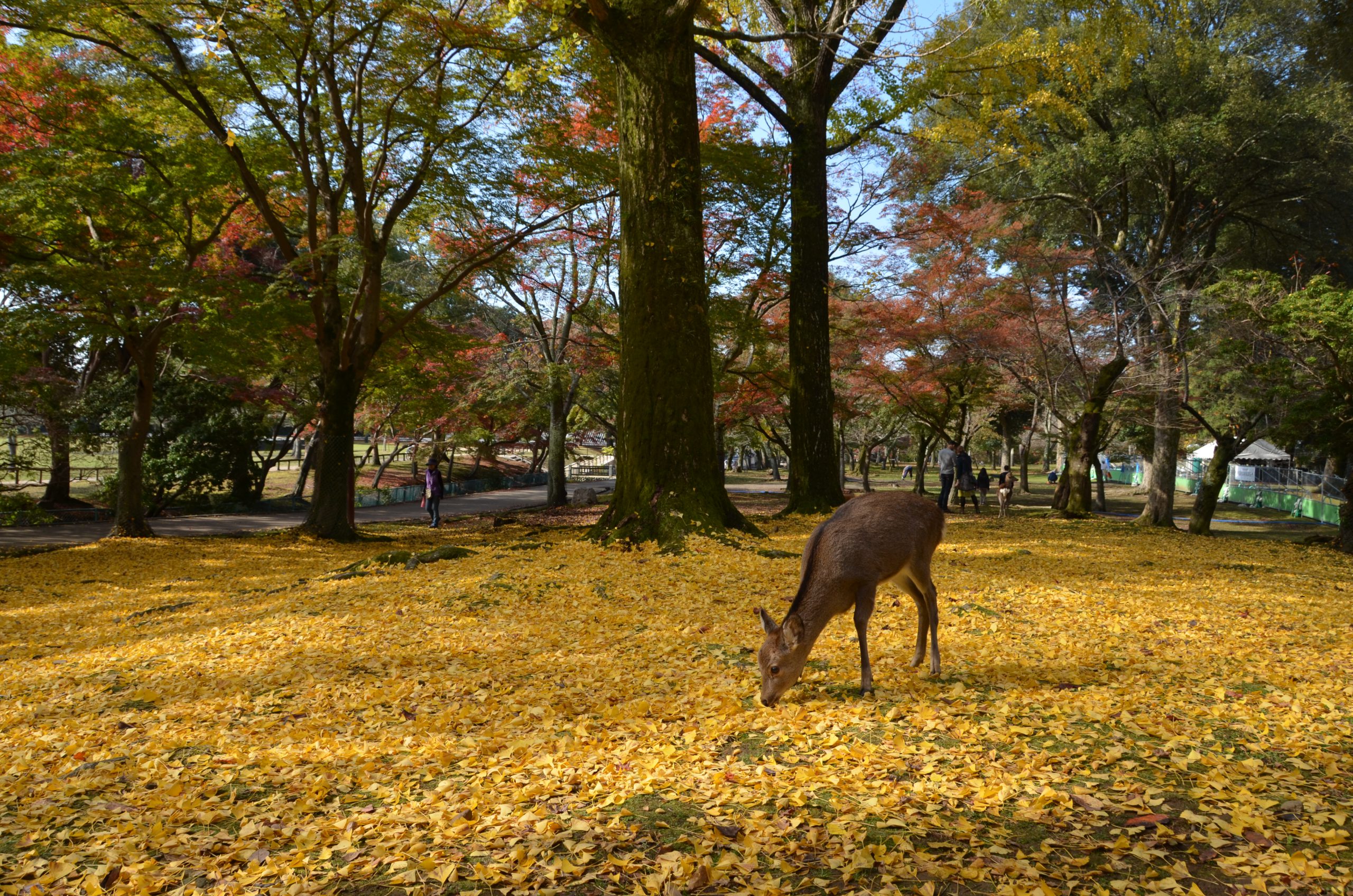 The Nara Park area is at the sightseeing heart of Nara. Routes which take in spots famous for their autumn colour include visits to Tōdaiji Temple, Kōfukuji Temple, and Kasuga Taisha Grand Shrine. Suggested routes can be done in reverse. 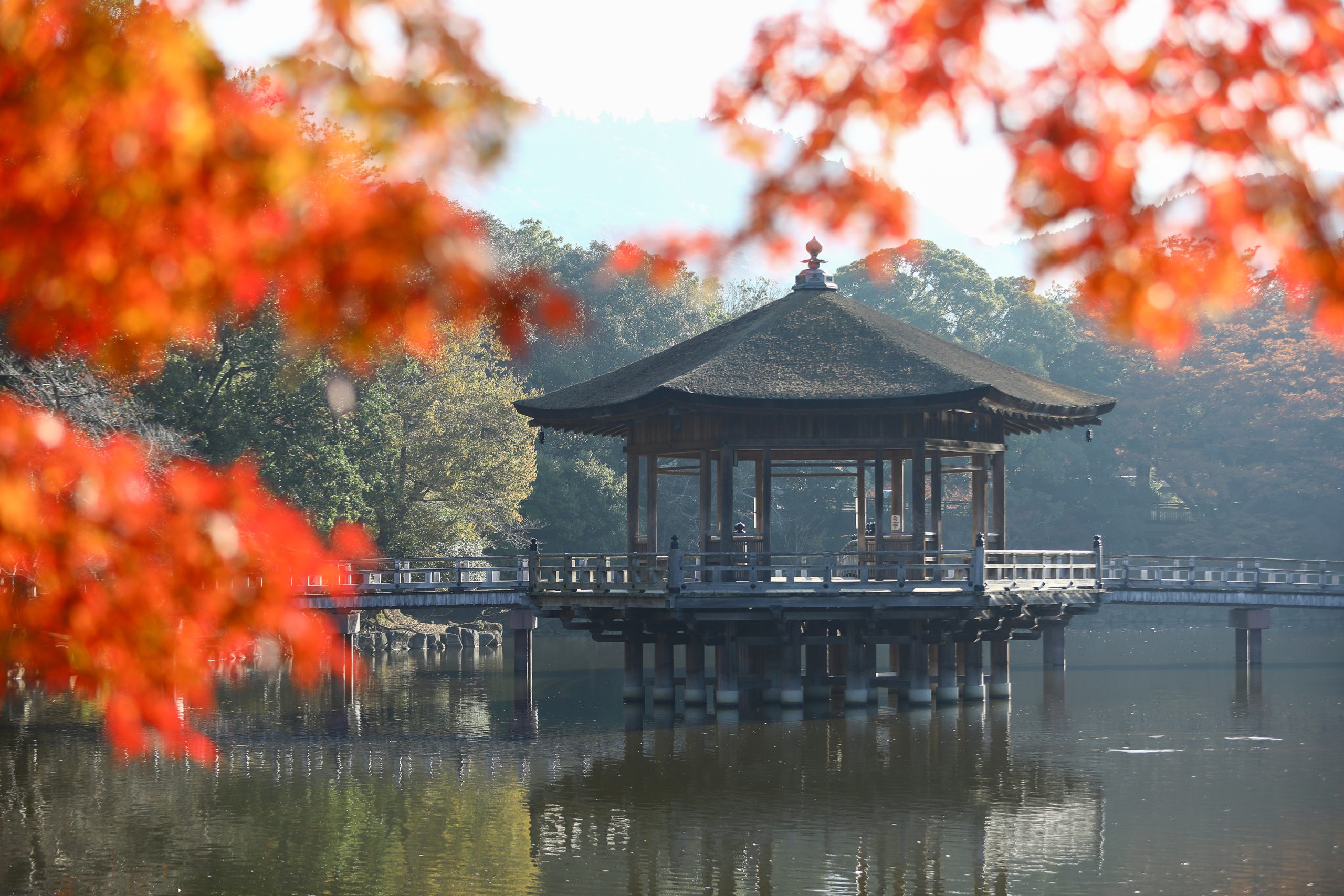 From JR Nara or Kintetsu Nara Stations, having visited Kōfukuji Temple, head for the Ukimidō Hall in the Asajigahara Enchi in Nara Park, right next to Kasuga Taisha Grand Shrine. Rows of trees with particularly beautiful autumn foliage stand in the area around the hexagonal Ukimidō which appears to float on Sagiike Pond. You could take a single, magnificent picture of deer, the Ukimidō, and the autumn leaves.

To Tōdaiji Temple after having visited Kasuga Taisha Grand Shrine. Passing through the Nandaimon or Great South Gate with its giant, 8-meter tall Niō guardian statues, the path leads to the Daibutsuden or Great Hall. Having prayed to the Great Buddha, you might like to stroll to the area around the Daibutsuike Pond at the back of the hall. This a great spot to take photos, with the colourful ginkgo, maple, and other trees, and the hall framed by the backdrop formed by Kasugayama, Wakakusayama, and Mikasayama. 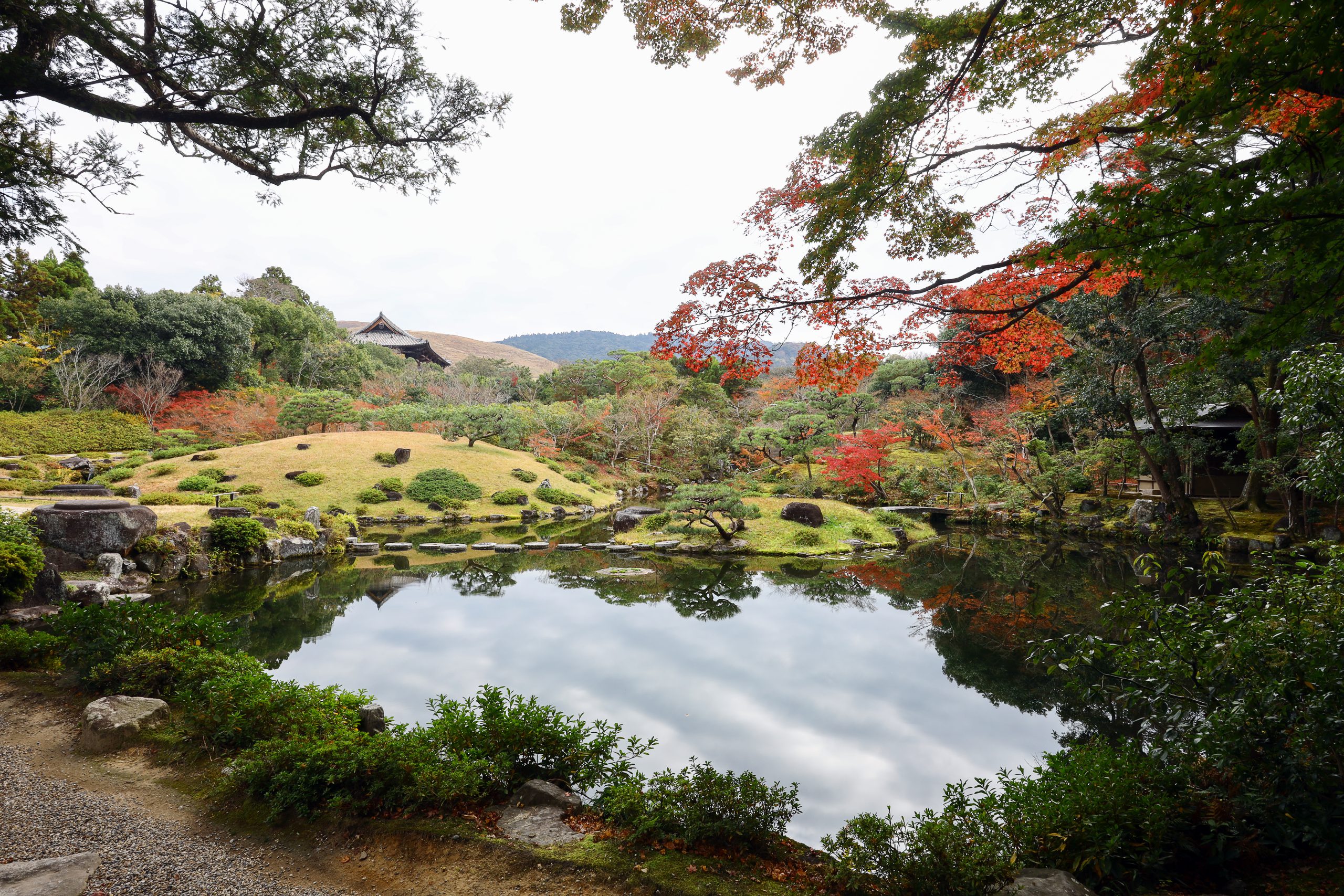 After visiting Tōdaiji Temple, you’ll find the Nara’s well-known strolling gardens, Isuien, if heading in the direction of the JR and Kintetsu Nara stations. 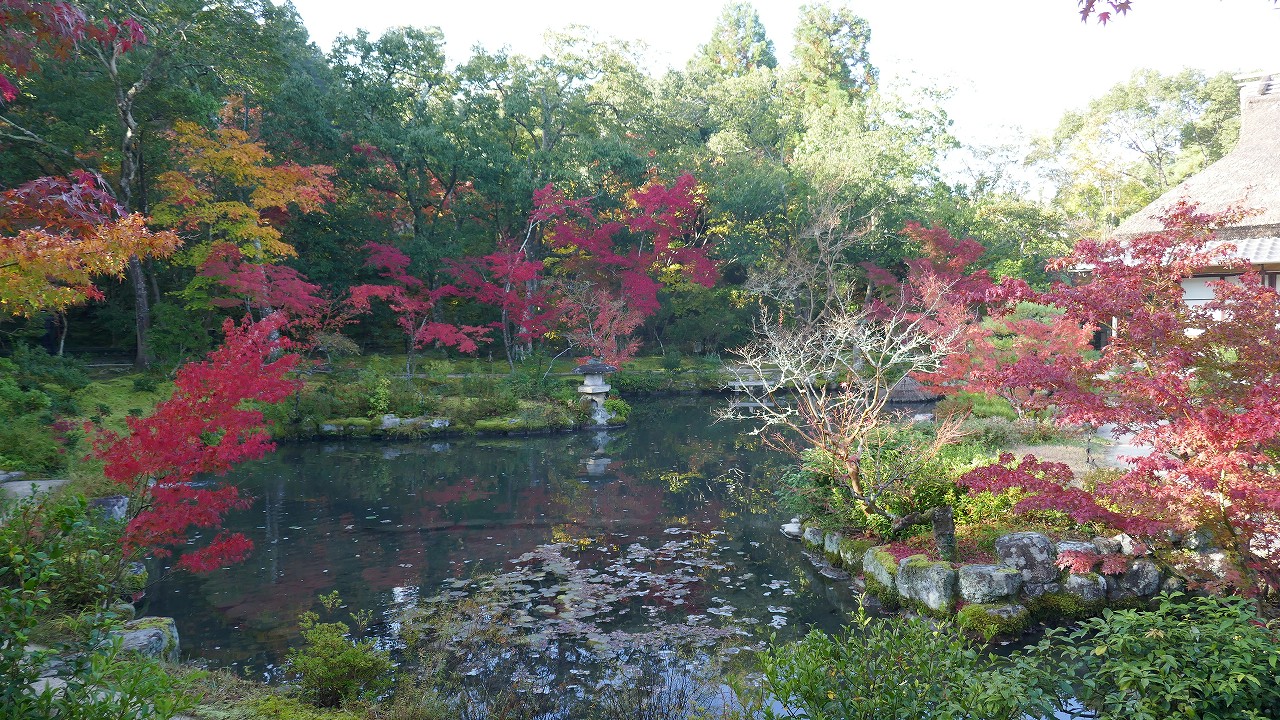 There are two adjoining gardens: the ‘Front Garden’ which dates from a time before the Edo Period (1603-1868), and the ‘Rear Garden’, which was created in the Meiji Period (1868-1912). On the same site is the Neiraku Museum. The museum has a collection and exhibitions of ceramics from China, Korea, and other countries, as well as Japanese tea utensils. The collection belongs to the Nakamura family which, over three generations, made their fortune in shipping. Walking in the garden you’ll see blazing red native azaleas (Enkianthus perulatus) and Japanese maples (Acer palmatum), as well as Jugatsuzakura (winter flowering cherry trees), a double cherry which blossoms twice a year, in late April and from October to December. You may like to rest for a bite to eat or green tea at the Sanshutei Tea House in the Front Garden. 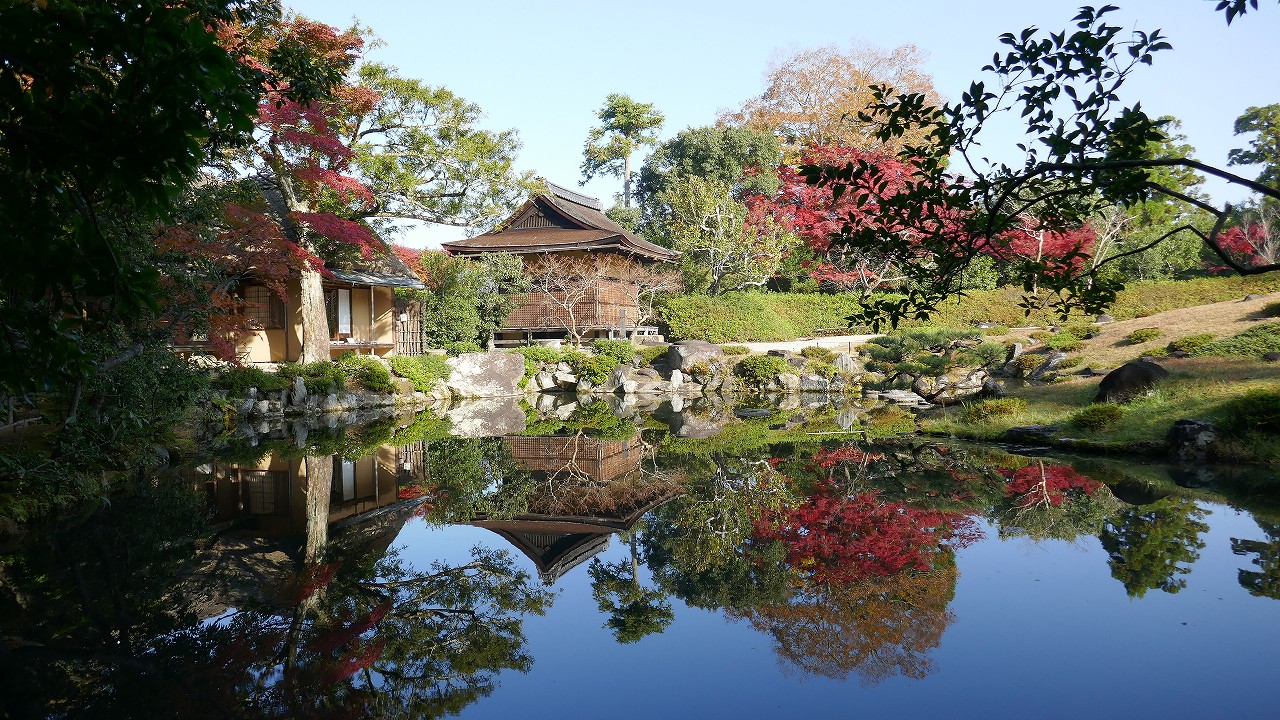 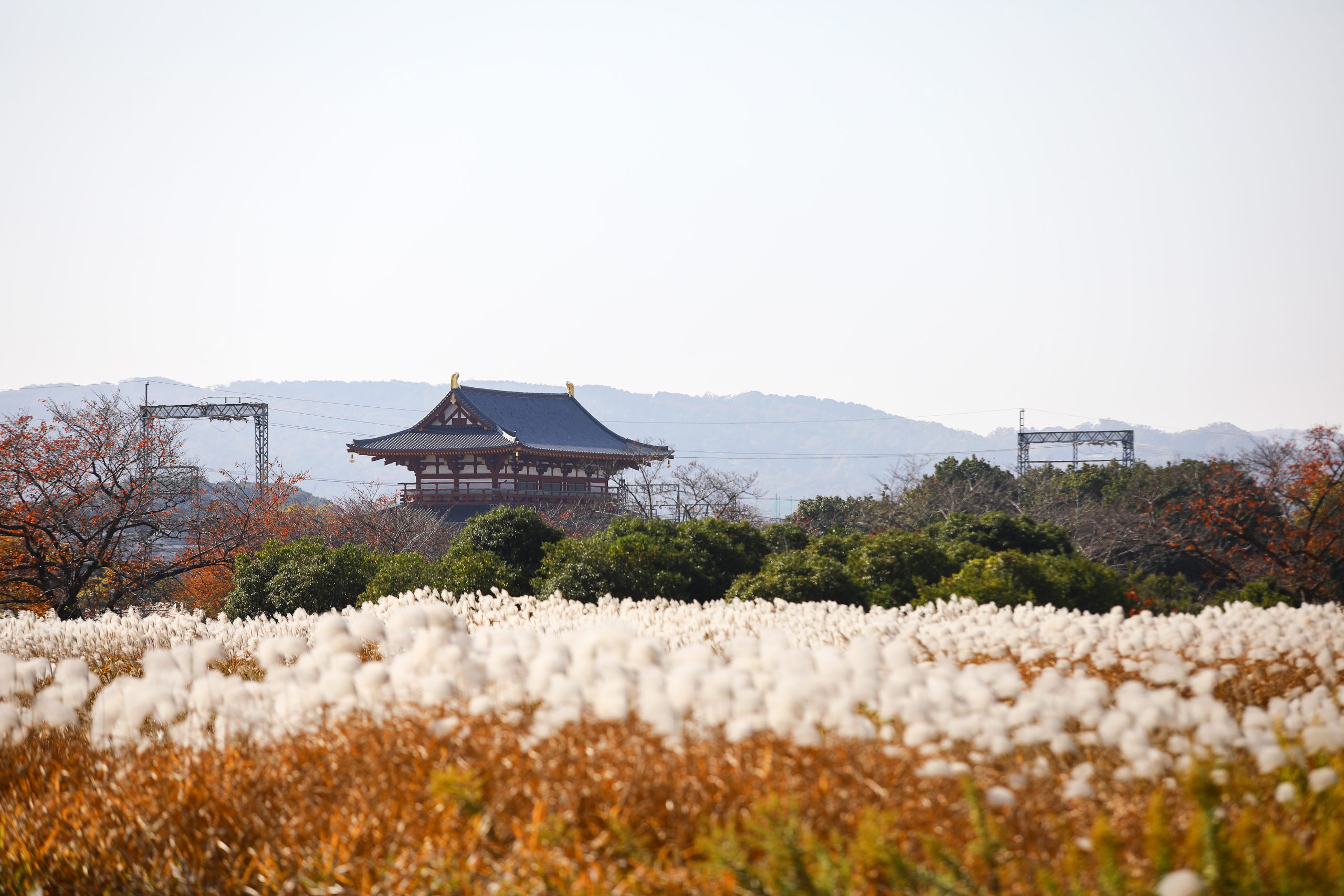 Heijō Palace Remains area Autumn as would have been experienced by those in the Tenpyō Period (Emperor Shōmu’s reign 729-749). Step back in time to the Nara Period

For those who’d like to extend their route slightly and discover Nara history and more of the cultural wonders of the past, we recommend getting a Gurutto Bus pass – which travels three routes around the city – and hopping on a bus on the Omiya route to the Heijō Palace Remains Park. The spacious, about 326 acre parkland is the site of the capital in the Nara Period. Conservation work had been carried out, and there has been some reconstruction. 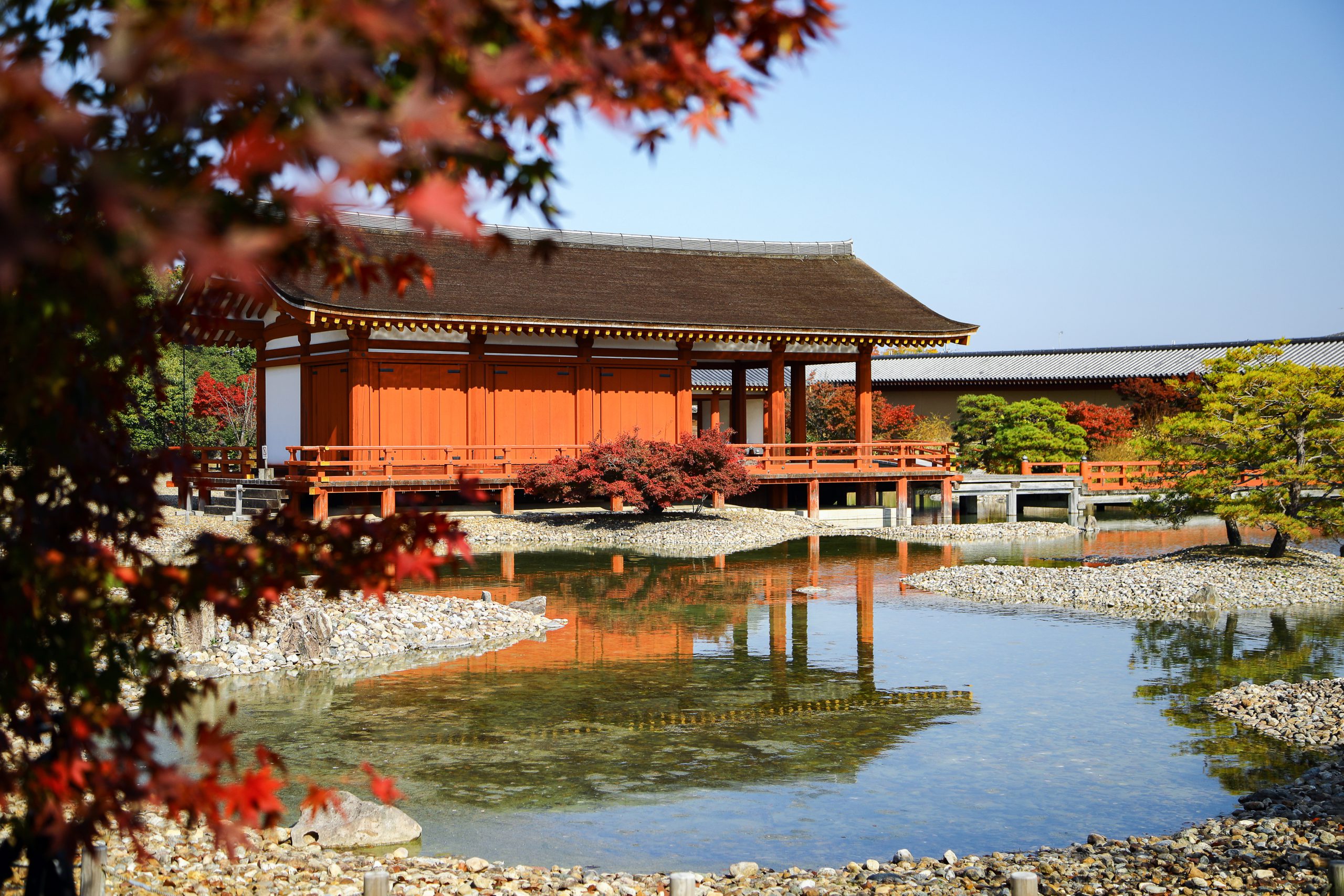 The Tōin Teien, or East Palace Garden, is one example. A garden where you’ll find a lovingly restored vermilion building set against a background of autumn colour. 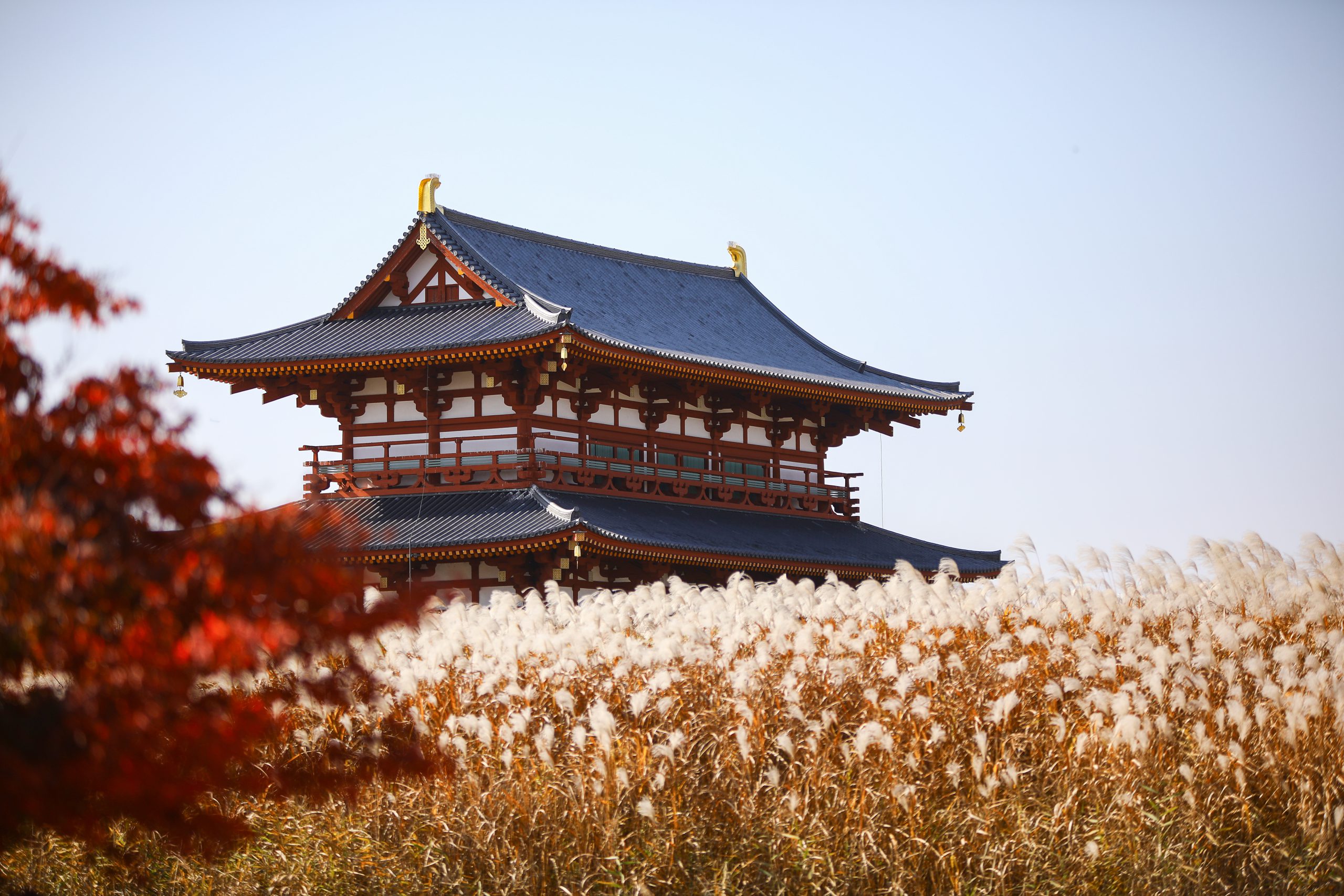 Another attraction is the broad area of ogi or Japanese silver grass, a tall grass related to rice. The silver ears of ogi waving in an autumn breeze and the Suzakmon Gate together evoke a real sense of the culture which flourished here in the Nara Period (710-784).