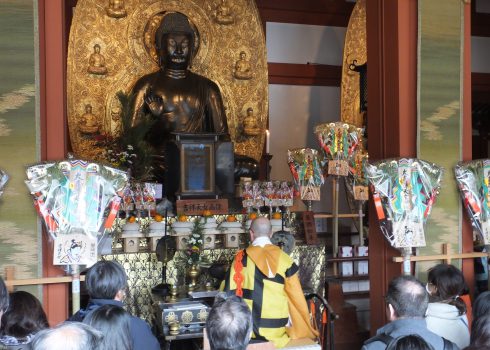 Repenting the sins of the previous year and praying for good fortune in the new year: Shusho-e

At Yajushi-ji Temple, the Shusho-e New Year’s ceremony in which sins of the previous year are repented and prayers are offered for peace of the nation, bountiful harvests, and good fortune in the new year is performed over a 14-day period beginning on January 1. The Kichijo Keka Hoyo (mass of repentance) is solemnly performed for Kichijoten, the Temple’s principal enshrined deity. In addition, a painting of Kichijoten dating from the Nara Period (710–784) designated as a National Treasure is worshipped as the temple’s principal treasure on January 1-3, and a painting of Kichijoten from the Heisei Period (1989-2019) is worshipped as the temple’s principal treasure on January 4-15. (Photo provided by Yakushi-ji Temple)