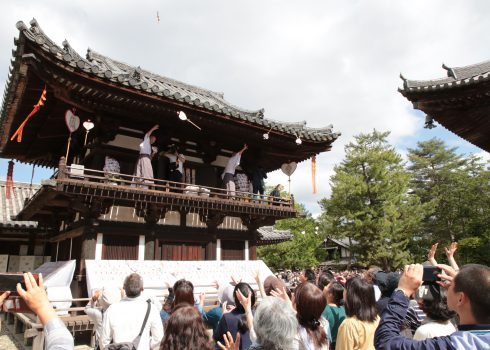 This Buddhist memorial service remembers the virtues of the holy priest Kakujo, who restored the Toshodai-ji Temple buildings. On the day of the ritual, uchiwa fans on which pictures have been drawn by various famous people from throughout society and several thousand misfortune-repelling uchiwa fans handmade at the temple are consecrated. Issan monks then perform a memorial service, with Bugaku court music and dance performed by the Nantokoyokai in the garden in front of the Ko-do Hall. Following the service, beginning at 3:00 p.m. heart-shaped hosen fans symbolizing immortality are scattered from the drum tower to worshippers waiting below.
*Only 500 hosen uchiwa fans are scattered from the drum tower, designated a National Treasure, during the ritual, and 500 tickets are distributed from 9:00 a.m. on a first-come, first-served basis. Regarding the 1,000 uchiwa fans that are handed out, lottery tickets are distributed until 2:30 p.m. and lottery winners are announced before the uchiwa-maki ritual begins. (Photo by Toshidai-ji Temple)

*Only Buddhist Service will be conducted this year.